While having my breakfast at Peggy Guggenheim Foundation in Venice i saw an unknown exotic fruit lying at my feet and suddenly a wave of energy captured my being, a primal desire, an explosion, desire to live and love. I think similar experience is described by Marcel Proust, who was overtaken by sensation of recognition tasting a cake from his childhood (i had read the book 25 years ago, do not remember well), only mine was brought by yet unknown (forbidden?) fruit. I was heading for an exhibition in Palazzo Fortuny dedicated to Marchesa Cassatti, who i had painted as one of “Three Graces of Silver Age”- a muse of Belle Epochue, a psychic involved in diplomatic circles as a greek oracle, a fashion guru, a heroinne of many prosaic and poetic works. Every time i encounter her or her close friend’s Gabrielle d’Annunzio’s privately owned objects for some reason tears or emotional wave of closeness come up, as if i knew them, was one of them….In the end of exhibition i discovered that Peggy Guggenheim had bought from Marchesa Cassatti the house in which i found the unknown fruit which brought back my wholeness. The mystery of ‎Ouroborus‬, or Full Circle. 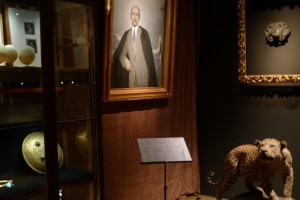 As some might know, i am taking full time studies at Angel Academy of Art, Florence, Italy. Why do classicist artists move to Florence to study? Why did they always do, especially brits? Ruskin stayed here and dedicated one of works to Florence, Pre-Raphaelite Stanhope worked here and designed St.Marks anglican church where i sing now in Sunday service choir, Robert Browning lived and worked here and buried his beloved (and according to new rumour murdered) wife, russian film director Andrei Tarkovski lived, struggled with depression and filmed his iconic “Nostalgia” here, endless, endless list of names who had at one or another stage in life left an imprint on my own.
I sit in the morning and sip my tea facing a memorial sign “DaVinci stayed here and worked on….(my italian is not that good)”….next to my home, from windows of which i overlook second floor of Palazzo Pucci now the seat of House of Pucci, overseeing their making of colourful psychodelic designs, need i say more?
Florence is known to be the home of (although well travelled) Michelangelo, Dante, DaVinci, Benvenuto Cellini and Sandro Botticelli, due to huge interest in art by Medici Family, merchants who grew powerful and magnificent in early Renaissance. But the town has huge spiritual undercurrent. After decline of Mediccis the “throne” was inherited by Rene d’Anjou (a name not featured in official history), who opened the first university here with main focus on occult studies. He himself was a scholar in who’s works the ancient legend of Arcadia opens up for the first time to europeans. It is him who Florence owes the Fleur-de-Lis as it’s heraldic symbol. It was also one of main Templar centres, both Dante and Borgello (according to some research) being initiates to. Sandro Boticcelli is known to be one of legendary Grand Masters of Preure de Sion, and his illustrations to Dante (structure charts of heaven and purgatory) are known examples of hidden knowledge passing from one initiate to another in Florence.
The Angel Academy is one of about hundred selective schools employing the Atelier method, a reconstruction of forgotten during the modernist era method employed by Academie de Beaux-Artes in 18th and mainly 19th century, method which some people jokingly call “slow painting” (referring to fashionable notions of “slow living” and “slow food”). It includes measuring, measuring, measuring and rendering, rendering, rendering, endlessly, trying to attain, as much as one can, elusive “perfection”.
As all ateliers employ the same teaching method, the difference is only in the hands and personality of the teacher. As much as all those schools are similar, as much are they all different.
Angel Academy was grounded by Maestro John Michael Angel who used to be one of most dedicated (and several tutors claim that they had been, while he actually HAD been) apprentices of Pietro Annigoni, who’s memory and legacy is still alive both in Florence and London. During years he attracted and nourished several now prominent figurative artists with his liberal rather than controlling and flamboyant (at instants on border with bombastic, which only adds charm) style. It is early to say anything about my own progress, as i came here unlike other “kids” being a quite formed artist with own knowledge and opinions, but i definitely enjoyed the year and am currently presenting my study works from school schedule at an exhibition in Scottish Arts Club.

No Newer Posts
No Older Posts
This site uses cookies: Find out more.